Is violent media partly to blame for knife crime? 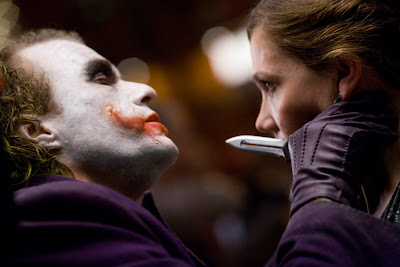 'The Dark Knight' (12A) - a film which caused controversy by its depiction of knives
At 6pm on 26th March 2010, during rush hour at Victoria Station in Central London, a gang of ten youths in school uniforms chased a fifteen year old boy in to the ticket hall and stabbed him to death. This was another shocking reminder of the knife crime that’s become increasingly prevalent amongst young people, and the desperate need for answers to this growing problem.  Of course variables such as social deprivation, the availability of weapons and family breakdown are all factors which are thought to have played a large part in contributing to the rise in knife crime amongst young people. However, there is also the suggestion that young people's consumption of violent media could be a contributory factor.

In 2008-2009 the government put together a report on Knife Crime which consulted professionals and practitioners from different fields to root out the causes for this dangerous trend. Safermedia was involved in pointing them towards evidence for the effects of violent media upon young people. Namely, to the research of Professor Kevin Browne - a child and forensic psychologist whose findings are cited in this report.  Below we have highlighted three of his key insights based on extensive research:

1. Media violence contributes around 10% towards any person's predisposition to be violent. It is not the only or the most powerful influence on individuals prone to violence, but a contributory factor. He argues that we could reduce violence by 10% by being more responsible in the way that we portray violence in the media.

2. The scientific lobby is very clear that media violence has short term effects upon children and adolescents.

3. Direct links have been proven between watching violent films and video games and using weapons, especially for those young people who come from a violent family background/environment.

For the full government report see:

Kids, Keep off the Grass

Since the advent of mass media there have been ongoing concerns about the potentially harmful effects of the media on society. In response to concerns, we have introduced age restrictions on video games and films; established a watershed on terresterial television and encouraged parents to patrol TV sets across the country ready to press the 'Off Switch'.

But is this really enough?

We have all heard primary school aged children talking about watching 18 rated films; we all know of children, some our own, who watch their TVs late in to the night unmonitored; we have all seen adolescent boys ogling pornography on their mobile phones. So, the controls evidently aren't working.

But do we particularly care?

If we're honest many of us doubt whether the media is a genuine threat to our children; so rather than establishing real measures to protect them we have resigned ourselves to setting up the equivalent of 'Keep off the Grass' signs adjacent to a children's playground. Perhaps our response is due to the fact that to many of us, the effect of the media is still open to debate. Perhaps, many of us really do doubt how dangerous the media is, and are thus unpertubed when the weak walls we put in place are breached. When we hear that a young man incessantly played a gruesome videogame and committed a copycat murder, we assume he would have done it anyway. When we hear about a sex attacker's addiction to pornography we assume that his own mind would have been enough motivation for his heinous crimes, pornograpy or no pornography.

Thus far, our debate about the media has been based upon subjective reasoning, and has been based upon people's different moral preferences and personal tastes. But, what if we could move this debate from the realm of the philosophers, theologians and social commentators to the realm of the social scientist and psychologist? What if they could provide us with objective, evidence based arguments for or against the media's effects and we could put a name and a face to the media threat and respond with appropriate measures.

As safermedia, one of our aims is to bring to your attention current research concerning the effect of the media on our society. It is our hope that as a society we will come afresh to this debate and simply look at the evidence. It is our plan to take the debate over the media from the arena of subjectivity to objectivity, where armed with information society can respond decisively.  As an introduction, over the next four months we will be sharing with you exciting new research about the effects of the media.  As well as this we will be keeping you up to date with media-related stories in the news and upcoming safermedia events.

Please take time to read, absorb and comment.
Posted by safermedia at 02:18 No comments: